Scientists who tested a variety of fruit extracts for their ability to prevent excessive  blood clotting found that tomatoes were a clear winner.

Tomato juice inhibited clotting of human blood, as measured by the aggregation of platelets, by 70% compared with 44% for pink grapefruit, 42% for honeydew melon and 33% for strawberry juice.

Initially, this action was thought to relate to the antioxidant red pigment, lycopene, which is concentrated within tomato skins and the pulp. The anti-clotting potential of each fruit tested did not match its antioxidant content, however, and other lycopene-rich fruits such as mango and nectarine did not have noticeably greater effects.

While the clear jelly surrounding tomato seeds seems an unlikely source for beneficial substances , further investigation revealed that the highest blood thinning activity was associated with the juicy, yellow fluid around the tomato seeds – not the pulp or skin.

The active substances were isolated and found to be water-soluble and stable after boiling. They might even explain some of the beneficial effects of the Mediterranean and DASH diets in protecting against high blood pressure and heart disease.

Platelets are cell fragments (thrombocytes) that regulate the stickiness and fluidity of blood. They respond to injuries in blood vessel walls – such as micro-tears caused by high blood pressure – and stick to the underlying exposed collagen.

Once activated, platelets lose their smoothness and become spiky. They release chemical signals (cytokines) that attract more platelets, white blood cells and electrically-charged fat globules into the area to plug the gap.

Ideally, the resulting platelet plug is temporary and dissolves away once healing occurs. If platelets and other components of the coagulation system remain over-active, however, fatty plaques can build up to cause hardening and furring up of the arteries (atherosclerosis).

Continued production of the chemical signals also causes other circulating platelets to become over-active, spiky and sticky, and are more likely to cause unwanted blood clots (thrombosis). 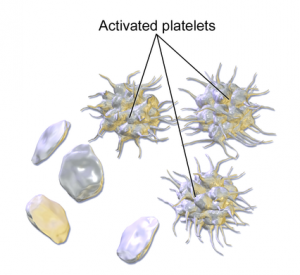 Conditions that are associated with over-active platelets include:

These conditions are all associated with an increased risk of atherosclerosis, angina and thrombosis which can lead to heart attack or ischaemic stroke.

In fact, overactive platelets are now recognised as contributing to increased blood pressure, which in turn damages artery walls, leading to more platelet aggregation to create a vicious cycle. 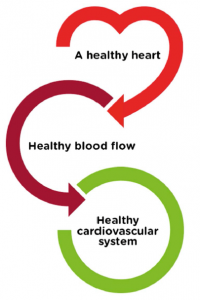 Researchers have discovered that over 35 different substances within tomato extracts have antiplatelet activity and can reduce the tendency towards thrombosis.

Importantly, tomato extracts do not work in the same way as aspirin. Aspirin reduces platelet clumping through one particular pathway, by inhibiting enzymes known as cyclo-oxygenases (COX-1 and COX-2). The response to aspirin is highly variable, however, with between 20% and 30% of people classed as non-responders due to aspirin-resistance syndrome.

As tomato extracts don’t target COX enzymes, they do not have the same side effects associated with aspirin, such as stomach irritation, peptic ulceration and increased bleeding time. Tomato extracts are also likely to be effective in people who do not respond to aspirin.

Another important point is that, unlike when taking aspirin, the effects of tomato on platelet aggregation are readily overcome when needed to mount a physiological response to injury.

While eating tomatoes or drinking tomato juice on their own has beneficial antioxidant effects on the circulation, the active antiplatelet ingredients found within the tomato jelly are not released or absorbed rapidly enough to produce a significant acute effect.

Scientists therefore isolated the active components and concentrated them into a patented extract called Fruitflow.

A follow-up study, involving 90 healthy volunteers, confirmed that tomato extracts reduced platelet aggregation by 21% after 3 hours, compared with inactive placebo, at a dose equivalent to extracts from 6 tomatoes. At a lower dose, equivalent to extracts from 2 tomatoes, platelet aggregation was reduced by 12.7%. The effects were greatest in those with high levels of substances known to increase the risk of abnormal blood clotting (eg homocysteine, C-reactive protein).

Initially, the benefits of taking Fruitflow last for 12-18 hours but, with continued daily use, they provide 24 hour protection. There are no reported side effects, and no disturbance of the normal blood clotting needed to heal a wound. The extracts have not been found to trigger allergies or intolerances, either.

In the largest single Fruitflow study, positive effects were observed in 97% of individuals tested, which compares favourably with single-drug therapies, such as aspirin, which are ineffective in up to 30% of people.

Fruitflow is as effective as aspirin

Latest results show that a single dose of Fruitflow is as effective as 75mg aspirin in reducing unwanted blood clots, but without the side effects, and without affecting normal clotting responses to injury.

After taking Fruitflow regularly for seven days, the suppression of platelet function was approximately one-third that of a daily 75mg dose of aspirin, and was less likely to interfere with normal blood clotting.

Tomato extracts also have the ability to inhibit angiotensin converting enzyme (ACE) to help lower a raised blood pressure. This makes the extracts especially useful for people with hypertension, in whom increased platelet activity plays a key role.

Other research suggests that tomato extracts are particularly beneficial when combined with omega-3 fish oils.

The evidence of effectiveness and safety for tomato extracts are compelling enough that the European Food Safety Authority has authorised a claim that Fruitflow: ‘Helps maintain normal platelet aggregation, which contributes to healthy blood flow.’ And, as I know from personal experience, they are extremely hard to convince!

A number of products now include the patented Fruitflow tomato extracts, and are designed for healthy adults who wish to maintain their cardiovascular health.

NB Many tomato products contain lycopene (which is beneficial in its own right) rather than Fruitflow – check labels to ensure you get the ingredients you are looking for.