Red reishi is also known as the Mushroom of Immortality and is a traditional adaptogenic herb  whose medicinal use spans at least 2000 years. Known as Reishi in Japan, and ling zhi in China, its name roughly translates as ‘soul mushroom’ or ‘spiritual plant’.

Ling zhi featured in the earliest Chinese pharmacopoeia, where it was classed as ‘Superior’ and rated as the number 1 medicine in a list of 120 superior medicines – even above Panax ginseng.

Taoist monks used Reishi to promote a calm, meditative state, to improve memory and to achieve a long, healthy life.

As the most exalted herb in ancient times, red Reishi soon became rare in the wild, and specimens found growing on old oak, cherry or plum trees were reserved for use by the Emperor.

Fast forward several millennia, and Reishi is now grown commercially and available to all, although it is less well-known in the West than Korean ginseng. Latest research suggests that Reishi can help support conventional cancer treatments.

Reishi consists of the dried, fruiting body of a fungus, Ganoderma lucidum, which is too woody, fibrous and bitter to eat as a food. 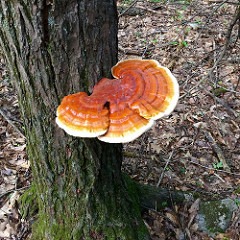 Six different colours of Reishi are recognised in traditional Chinese medicine: red, green, white, yellow, purple and black. Of these, red Reishi (hong ling zhi) is considered the most potent, especially if the cap assumes a swirled, ram’s horn shape.

Reishi contains over 100 different triterpenes, including a unique group of lucidenic and ganoderic acids that have a similar structure to steroid hormones. These are present in the fruiting body and in the mycelium, or root-like structures that grow into wood to extract nutrients.

Reishi mushrooms are dried and consumed in the form of teas, tinctures, or finely ground to make tablets or capsules.

Reishi mycelium was not traditionally used as a tonic herb, but researchers have found it is a richer source of the same active triterpenes, and these softer roots are easier to grow and compact to produce tablets and capsules.

Reishi is one of the most widely researched traditional herbal medicines in China and Japan. Most scientific studies have focused on how it affects immunity, the circulation, glucose regulation and liver function. Little of this research has been translated into English, however, and few studies have been performed in the west, which is largely why it does not have the same popularity over here.

Research from China suggests that Reishi increases the activity of T-lymphocytes involved in fighting infections and targeting abnormal cells. In traditional herbal medicine, it is used to boost immunity after chemotherapy or radiotherapy.

Reishi is not a cure for cancer, but may support usual medical treatment. This suggestion comes from no less a body than the Cochrane Library who provide trusted evidence to help people make informed decisions for better health. 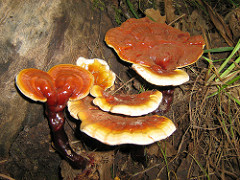 A recent Cochrane systematic review assessed the available evidence for using Reishi mushroom to support immunity and quality of life in people with cancer. They pooled the data from 5 randomised controlled trials, and found a significant benefit.

The reviewers concluded that, although there was currently insufficient evidence to justify the use of Reishi on its own as a first-line treatment for cancer, Reishi could be used together with conventional treatment due to its potential for stimulating host immunity and enhancing tumour responses to treatment.

Reishi was generally well tolerated by most people with only a few experiencing minor side effects such as nausea or insomnia.

The reviewers suggested that use of the extract should be judicious, after thorough consideration of cost-benefit and patient preference. They added that it remains uncertain whether Reishi helps to prolong long-term cancer survival.

IMPORTANT: If you have cancer, or have undergone chemotherapy or radiotherapy, you should only use Reishi with the consent of your own doctor, and under their direct medical supervision.

Reishi (Ganoderma lucidum) contains four peptides that act in a similar way to ACE inhibitor antihypertensive drugs. In a Japanese study involving 50 people with essential hypertension taking Reishi extracts for 6 months lowered average blood pressure from 156/103 mmHg to 137/93 mmHg. This improvement of 19/10 mmHg is better than is seen with many prescribed antihypertensive drugs.

However, a Cochrane review found too little evidence available to assess the benefits of Ganoderma lucidum mushroom benefits for heart health. They found five trials, involving a total of 398 people, one of which was translated from China, and one of which was unpublished. Three of the studies were in people with type 2 diabetes mellitus and used doses of 1.4 g to 3 g per day for 12 to 16 weeks. They found no significant improvements in fasting plasma glucose levels, blood pressure or triglycerides and concluded that the small number of randomised controlled trials did not support the use of Reishi for treating cardiovascular risk factors in people with type 2 diabetes, and that more placebo-controlled research was needed.

Reishi as a general tonic

Most people who take Reishi use it as a general tonic and adaptogenic herb to help them remain healthy, based on traditional use. It is especially popular during winter months to boost immunity against colds.

The effects of Reishi are enhanced by vitamin C which increases absorption of the active components.

NB If you have any medical condition or are taking any prescribed medicines, only use Reishi under clinical supervision – especially if you are taking immunosuppressive drugs, anticoagulants or cholesterol-lowering medication.

Reishi may increase the sedative effects of certain drugs.

Do not take if you are on anticoagulant medication, as Reishi may have a blood thinning effect similar to that of aspirin.

If in doubt always check with your doctor or a pharmacist.