When inhaled, lavender aromatherapy oil is an effective sedative used to aid sleep – but don’t even think about swigging from that bottle at the back of your cupboard. For safe use by mouth, the lavender oil must come from the flowers of one particular species of lavender, Lavandula angustifolia Miller.

The lavender oil must also be prepared to pharmaceutical standards known as GMP to provide a consistent dose of active ingredients. Other non-pharmaceutical grade lavender oils should not be taken by mouth as they may contain pesticides or other impurities, and contain synthetic chemicals.

As many as one in five people feel anxious for a lot or all of the time. Worry and negative, spinning thoughts interfere with self-confidence, the ability to concentrate and can lead to difficulty sleeping. 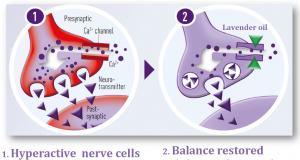 These emotional symptoms, along with racing pulse, nausea, tension and headache, are due to excessive stimulation by excitatory neurotransmitters within the nervous system.

Brain scan studies on 17 healthy men who took lavender oil capsules or placebo for 8 weeks, found that lavender oil works by significantly reducing excess binding of neurotransmitters to specific serotonin-1A receptors in the brain. This allowed free levels of serotonin and other neurotransmitters involved in regulating mood and anxiety to rise. 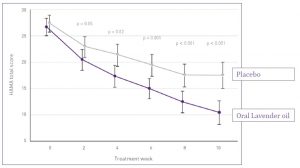 A trial involving 27 general practices and psychiatric centres compared the effects of pharmaceutical grade lavender oil against placebo in 216 people with anxiety.

Both reduced the physical and psychological symptoms of anxiety, and improved sleep to a similar extent (by around 45%).

The lavender oil capsules were as effective as lorazepam for treating generalized anxiety disorder, with no sedative effects and, importantly, no potential for addiction or drug abuse (unlike the benzodiazepines).

A total of 523 people with generalised anxiety disorder were randomised to take either lavender oil capsules or paroxetine. Results showed both treatments were equally effective, and the lavender oil had beneficial effects on mental health in general, and health-related quality of life.

When 170 people with anxiety-related restlessness and disturbed sleep were given either 80mg pharmaceutical grade lavender oil or placebo, once a day for 10 weeks, symptoms decreased significantly more in those taking lavender capsules, with around one-third (31%) achieving remission. This confirms the calming effect of lavender oil in relieving anxiety. The results were even more pronounced in people with moderate to severe anxiety at the start of the trial.

Unlike when lavender oil is inhaled, the oral capsules are not sedative and that are not habit-forming.

Do not exceed the recommended dose.

Side effects can include belching or burping, and a few people have reported mild skin reactions such as itching or a rash.

If anxiety is persistent or excessive, always seek medical advice.

Have you tried lavender oil? Did you find it effective?

Click here to read my advice on How To Sleep Better Naturally.

Do Not Sell My Personal Information

Exercise your consumer rights by contacting us below

Turning this off will opt you out of personalized advertisements delivered from Google on this website.