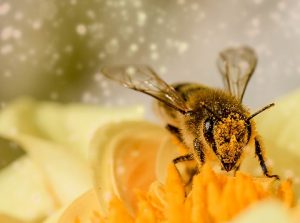 A study from the University of Connecticut tested the effects of local honey for hayfever. A group of 36 people with self-diagnosed, seasonal allergic eye and nose symptoms (rhinoconjunctivitis or hayfever) were randomly assigned to one of three groups and given a 5 pound jar of ‘honey’ that contained either:

Starting from mid-March, before hayfever symptoms started, all volunteers ate one tablespoon (15ml) of ‘honey’ every day for 30 weeks. They could either take the dose all in one go, or divided into three separate doses of 5ml (on teaspoonful) each, if they preferred.

Each person also recorded the severity of ten different allergy symptoms from 0 to 3 in a daily diary:

Only 23 people completed the 30 weeks trial. Those that dropped out did so for personal reasons, because they were unable to maintain the diary or because they found the honey hayfever cure too sweet. 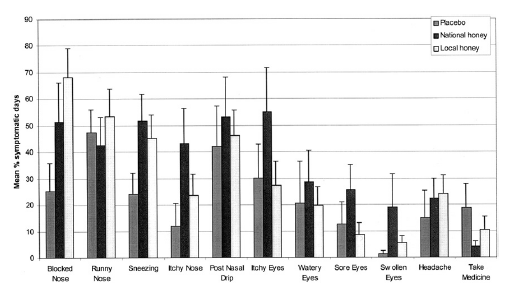 Each diary day was classed as either a symptom day or a no symptom day. Symptoms were assessed overall, and against different time periods when tree or grass allergies were most common.

No significant improvements were found for those taking the local honey and, in fact, the placebo group did better than those eating local honey or supermarket honey.

The overall conclusion from this small trial was that eating local honey does not relieve the symptoms of hayfever, and that many people find taking 1 tablespoon of honey per day too sweet.

BUT when the researchers went back and reviewed the volunteers’ scratch-test results to confirm which allergens they reacted against (including a mix of 7 grass pollens, 11 tree pollens and ragweed) only 14 of the final 23 volunteers with self-diagnosed hayfever actually had a true seasonal pollen allergy.

This makes it difficult to draw any meaningful results from this study. The other problem was that the honey was probably started too close to the hay fever season to have any immunotherapy effect.

Volunteers took the local honey treatment from November until the end of March, before the seasonal allergies were expected to kick in.

The researchers used a locally collected, unpasteurised, unfiltered organic honey which contained no birch tree pollen (regular honey), and compared its effects with the same local honey that was enriched with bee-collected birch pollen. Each gram of enriched honey contained around 8,400 birch pollen grains. The two types of local honey looked and tasted identical.

Forty-four volunteers with hay fever, and doctor-confirmed positive skin prick tests to birch pollen, were divided into three groups. One group acted as a control and did not take any local honey products, while the other volunteers were given 900g each of either the regular local honey or the birch-pollen enriched local honey.

Those in the local honey groups were asked to start eating their honey in November, at an initial dose of one small droplet (less than 1g) per day, dissolved slowly in the mouth. The dose was increased every 3 weeks to a maximum of 1 teaspoonful (around 8g) per day, which was continued until the end of March. This small but increasing dose was designed to act like immunotherapy to retrain the immune system.

The volunteers kept a daily diary of allergy symptoms throughout the honey stage of the trial, and during the subsequent birch pollen season. They also detailed their use of antihistamine tablets, nasal sprays and eye drops. The researchers also documented the daily pollen concentrations.

Compared to the control group that did not take any honey, those taking the birch pollen honey had significantly lower total symptoms scores during the pollen season overall, and individually for both April and May.

Overall, compared to the control group, those taking the birch pollen honey had:

So does local honey prevent hayfever?

There is little evidence on which to draw any firm conclusion. It does seem that in people with a true pollen allergy, using local honey may reduce hayfever symptoms – at least for birch pollen allergy. But the local honey probably needs to be taken for at least five months before the pollen season is expected. It may also help to start at low, immunotherapy doses which are slowly increased to help the immune system tolerate them better.

If you have hayfever, wear wrap-around glasses, and to apply a nasal barrier to reduce contact between allergens and the nasal lining.

Click here to read my review of the most effective hay fever treatments.

Have you tried using local honey to prevent hayfever? Did it work? Please share your experience via the comments below.