Red grapes are well-known for their beneficial antioxidants, and red vine leaf extracts are derived from the leaves of the same grapevine, Vitis vinifera. Red vine leaves are harvested when they achieve a rich red colour and have the highest content of antioxidant polyphenols. Their extracts are used medicinally for their circulatory effects, especially within leg veins. They reduce inflammation, stabilise the endothelial lining of capillaries and veins, and promote their repair to reduce swelling of the ankles.

Red vine leaf extracts stabilise the endothelial lining of tiny capillaries and promote their repair and reduce their permeability. This makes capillaries less leaky so less fluid passes from the circulation into the tissues to cause swelling of (oedema) of surrounding tissues. 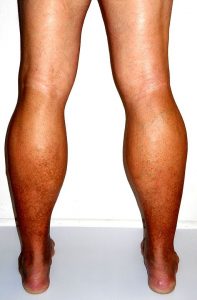 Chronic venous insufficiency is a common problem in which the leg veins and their valves do not work properly. This makes it difficult for blood to return up from the legs, to the heart (against the pull of gravity) so blood pools in the lower legs.

Symptoms of chronic venous insufficiency include feelings of heaviness, aching legs, swelling of the ankles or calves, sensations of tension in the legs and pain. The overlying skin may become dry and discoloured and acquires a characteristic mottled pigmentation.

If the leg vein valves collapse, then swollen veins become distended and tortuous and may bulge beneath the skin to form varicose veins.

In severe cases, impaired flow of both blood and lymph drainage can result in venous leg ulcers.

In Germany, as many as 7 % of the general population take red vine leaf extracts (Antistax), usually on the advice of their doctor, to reduce swelling and other leg symptoms associated with chronic venous insufficiency.

Some people use red vine leaf extracts together with compression stockings, while others use them on their own, depending on the severity of their symptoms.

One of the first studies to assess the effectiveness of red vine leaf extracts (Antistax) asked 71 people with leg swelling (due to chronic venous insufficiency) to take 360mg red vine leaf extracts, or placebo during two separate periods of 6 weeks. This meant that each person tried both treatments and acted as their own controls.

Researchers next assessed the best dose in a 12-week study involving 257 men and women with mild to moderate chronic venous insufficiency. One group took 360mg red vine leaf extracts per day, one took 720mg daily, while another took placebo.

In those taking the inactive placebo, lower leg volume continued to increase. In the other two groups, leg swelling reduced compared with placebo to produce a 76g reduction (weight of water displaced) in those taking the lower dose, and 100g reduction with the higher dose. Changes in calf circumference also decreased and improvements in swelling were at least equivalent to those expected from wearing compression stockings. Those taking the red vine leaf extract also reported significant improvements in related symptoms such as tired, heavy legs, sensations of tension, tingling and pain, with no significant side effects.

This was followed by another study, involving 248 patients with more severe chronic venous insufficiency, classed as moderate-to-severe. Half took 720 mg red vine leaf extract per day for 12 weeks, while half took inactive placebo. The red vine leaf extract significantly reduced lower limb volume by 20 ml more than placebo (27ml versus 7ml) with an associated decrease in leg pain.

In a study involving 30 people with acute deep vein thrombosis, all received usual medical treatment with anticoagulants, and half were also given red grape leaf extracts.

After 3 months of treatment, those who also received the red vine leaf extracts showed greater improvements in blood clotting factors and in the dissolution of the fibrin clot, with a more pronounced opening up (recanalization) of veins in the affected area.

The researchers concluded that adding angioprotectors (red vine leaf extract) to standard medical treatment helps to correct endothelial dysfunction (the ability of veins to recover and dilate) and may improve the immediate results for patients with acute venous thrombosis.

The usual dose is 360 mg to 720 mg daily, but follow manufacturer’s instructions as the concentration of red vine leaf extracts vary. Only select supplements made to a pharmaceutical standard known as GMP, as low quality red vine leaf products (on sale in health food shops in Japan) were found to contain low levels of active polyphenols, and inconsistent levels per tablet.