Lack of iron is one of the most common mineral deficiencies in the world, with most cases going unrecognized. If your doctor has diagnosed iron-deficiency anaemia, don’t stop taking your iron tablets until your low iron or haemoglobin level is corrected and your doctor says it’s time to stop. Iron has many important effects in the body. As well as carrying oxygen around the body with red blood cells, iron is also involved in making energy, reducing tiredness and fatigue, healthy cell division, for clear thinking and concentration, and for optimum immunity against bacterial, viral and yeast infections.

What happens if you stop taking iron pills?

If your doctor has prescribed iron tablets, then you either have low iron stores (measured via a protein called ferritin) or this has progressed to cause iron-deficiency anaemia. Iron deficiency anaemia is associated with a low level of haemoglobin (the red blood pigment) in the circulation and with making red blood cells that are smaller than normal.

If you stop taking your iron pills then nothing will happen immediately. You may even feel a bit better if the iron tablets were causing indigestion or constipation (in which case switch to a different formulation, see below). If your iron deficiency was due to a low dietary intake and you don’t start eating more iron-rich foods (eg red meat, dark green leaves) then stopping your iron tablets means the iron deficiency will slowly creep up again and you will start to feel increasingly tired and lacking in energy.

Red blood cells, which contain iron to carry oxygen around the body, last within the circulation for around 120 days and are then filtered out (for example by the spleen) and replaced. If there is insufficient iron to meet the requirements of the new red blood cells, then symptoms of iron deficiency will re-appear within 3 to 4 months – sooner if you have increased iron requirements (eg pregnancy) or increased iron losses (eg heavy periods).

As your iron levels fall further, you will become more prone to infections such as colds and Candida, fatigue easily, and have difficulty thinking straight. Stopping your iron tablets can also lead to headaches and restless legs syndrome as iron-deficiency anaemia develops. Iron deficiency anaemia can also reduce fertility.

If you are thinking of stopping your iron tablets because of side effects, you may find that iron pills which supply iron in the form of ferrous bisglycinate, ferrous fumarate or ferrous gluconate are more gentle, and less likely to cause nausea or constipation than ferrous sulphate.

Iron-rich spa water is also available as a liquid iron tonic, as are iron-rich syrups and tablets from herbal sources.

Iron tablets are best taken on an empty stomach (washed down with juice) if possible, to maximise absorption. If this makes you feel sick, however, take them with a little food – just a few bites will help.

Don’t wash down iron supplements with tea or coffee, as these contain tannin polyphenols which can reduce iron absorption by up to 39% if taken together or within an hour of each other.

How iron absorption is regulated

Your intestines have a clever mechanism to ensure you only absorb as much iron as you need from your diet – whether in food or supplements. This system works on the fact that gut lining cells are shed every three to five days. Iron absorbed from the gut (mostly in the duodenum) is stored in these gut lining cells (enterocytes) bound to ferritin protein and, once the ferritin is saturated, no more iron is absorbed from food or supplements. If you are iron deficient however, your intestinal lining cells will keep absorbing iron. 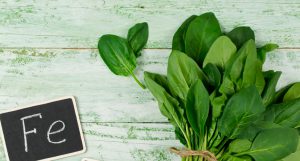 This highly tuned process helps to ensure that the amount of iron in your circulation does not rise too high. It also accounts for the fact that higher dose iron supplements can cause intestinal side effects such as dark motions, diarrhoea or constipation, because their iron stays in the gut rather than being absorbed into the body.

Some people inherit an ability to bypass this mechanism and absorb too much iron, causing a condition known as haemochromatosis.

If you stop taking your iron tablets, it’s important to ensure you continue to get good dietary intakes of iron, or you will soon develop iron deficiency again.

Women are more at risk of iron deficiency than men, because of blood losses during menstruation. This can result in a low-grade iron deficiency that is enough to impair immunity and cause tiredness and poor work performance, reduced fertility and headache without causing frank iron-deficiency anaemia.

If unrecognised and allowed to progress, lack of iron quickly leads to the production of red blood cells that are significantly smaller and paler (due to lack of haemoglobin) than normal. This iron-deficiency anaemia is associated with generalized skin itching, concave brittle nails, hair loss, sore tongue, cracking at the corners of the mouth, profound exhaustion, reduced appetite and difficulty in swallowing. The affected person will look very pale with a fast pulse, dizziness, shortness of breath and can lead to angina and even a heart attack.

To make things slightly more complicated, inorganic iron exists in two oxidation states: ferrous (Fe2+) and ferric (Fe3+) which have separate uptake mechanisms. Ferric iron – the form in which most plant-derived iron is obtained – is less well absorbed due to low solubility at the pH found in your small intestines. Vitamin C increases absorption by converting ferric iron to ferrous iron. Avoid over-boiling vegetables as this decreases their iron availability by up to 20 per cent as well as destroying any vitamin C present.

Iron intakes have fallen over the last 30 years due to decreased meat consumption and energy intake. People  who are most vulnerable to iron deficiency anaemia include:

If your doctor has recommended that you take iron tablets, it is important to keep taking them.

If you decided to take an iron-containing multivitamin yourself, because you don’t eat much in the way of iron rich foods, don’t let this study put you off taking them.

However, if you have persistent symptoms such as tiredness or fatigue, do seek medical advice to find out the cause. This is especially important if you are female and experience heavy or prolonged periods.

Your doctor can confirm whether or not you have iron deficiency through a blood test to assess your red blood cells, and to measure levels of your iron storage protein, ferritin. Iron deficiency anaemia is not a diagnosis you should make on your own as it’s important to know the underlying cause.

If you eat plenty of iron-rich foods then select a multivitamin that does not contain iron as you will absorb all that you need from your food.

The EU RDA for iron is 14 mg for adults, while the US DV is 18mg. The upper safe level for long-term use from supplements is just 17mg per day. However, much higher doses are prescribed for short-term use when iron-deficiency is confirmed (eg 200mg ferrous fumarate providing 65mg elemental iron). These higher doses of iron are best taken under medical supervision.

Iron supplements can cause side effects such as nausea, indigestion, diarrhoea or constipation, and black stools (due to the formation of ferrous oxide which is black in colour). Having black stools is often considered a desirable side effect as it shows you are taking a high enough dose for excess to appear in the stools.

Excess iron is toxic, especially for children, and it is important to keep iron supplements well away from small children as eating just a few can be fatal. If a young child eats an iron tablet seek urgent medical advice or go to A&E.

Do iron supplements cause cancer?

Lack of iron is one of the most common mineral deficiencies world-wide, so I read with despair the recent headlines suggesting that iron levels found in iron supplements ‘could damage the body within just 10 minutes’. This study does not reflect what happens in the human body, however, as the researchers added a strong iron solution to blood vessel cells grown in a laboratory. Not surprisingly, these cells rapidly showed signs of damage as iron on its own is highly oxidant. We know that – it’s why iron rusts so quickly in the presence of oxygen.

Luckily, the human body is a bit more sophisticated than that. Within the circulation, iron is bubble-wrapped in an array of protective carrier proteins – including haemoglobin, ferritin and transferrin – to which it is tightly bound and unavailable for interaction with blood vessel lining cells. Only a tiny amount of iron remains unbound and that which is buffered by other components of the circulation with antioxidant properties which were not present in this study.

If you have iron-deficiency anaemia, don’t let this study or the scary headlines put you off taking your iron supplements or prescribed medicines until your iron deficiency has been corrected and your doctor tells you to stop taking your iron pills.