Any herbal remedy that is consistently used for thousands of years is likely to have more than a placebo action. Pinning this down in the scientific literature isn’t easy, however, as leaves from 15 or more different species of Epimedium are used in traditional Chinese medicine. These are collectively known as Herba Epimedii, or Yin Yang Huo – a name that apparently translates as ‘obscene goat leaves of pulse plants’. 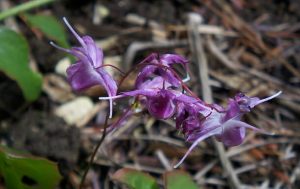 After six months, those taking Herba Epimedii showed significant improvements in total cholesterol and triglyceride levels, and increased blood levels of oestradiol, but no changes in progesterone or testosterone levels.

The women were randomised into two groups, with half taking an Epimedium extract (containing 60 mg Icariin, 15 mg Daidzein and 3 mg Genistein) plus 300mg calcium per day, while the other half took calcium alone.

No changes were seen in blood levels of estradiol (a human oestrogen) nor endometrial thickness, and the researchers concluded that Epimedium-derived phytoestrogen flavonoids exert a beneficial effect on preventing bone loss in late postmenopausal women without detectable adverse effects.

Icariin appears to work as a biological response modifier by triggering mechanisms that usually cause abnormal cells to self-destruct (apoptosis), by priming immune defences, by regulating the cell growth cycle, by preventing the ability of tumours to produce their own blood vessels, and by preventing cancer cell spread. Research also suggests that icaritin may be effective against hormone-dependent cancers (eg prostate, breast) that are resistant to hormone treatments, through effects on their hormone receptors.

It’s early days, and has not yet reached the stage of clinical trials, but icariin is under investigation as a potential anti-cancer drug to enhance the effectiveness of chemotherapy regimens. 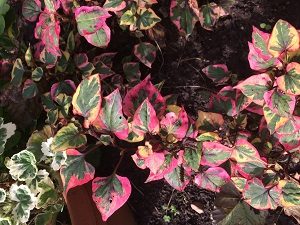 Oh, and that rockery plant whose heart-shaped leaves triggered my interest?

Turns out it wasn’t a variegated Epimedium sagittatum after all, but a rather lovely Houttuynia cordata ‘Chameleon’. Almost a shame!

If your libido is flagging, click here to read my feature on Diet And Low Sex Drive