Infertility is defined as a lack of conception after 12 months of regular, unprotected sex (at least twice a week) with the same partner. Worldwide, one in six couples has fertility problems. A better term than infertility is subfertility, however, as in most cases there still remains

a good change of conceiving – either naturally or with modern fertility techniques.

Fertility does naturally fall with age – especially in women. Some of this age-related fall in fertility has been linked with the adverse, toxic and hormone-like effects of modern plastics. The presence of these chemicals in the sea, as marine pollutants, is why women and girls are now advised to restrict their intake of oily fish to no more than two servings per week, as well as limiting their intakes of tinned tuna, crab and some types of white fish. Omega-3 fish oil supplements are safer, as they are processed to ensure these toxins are removed.

The most common factor accounting for age-related reduced fertility, however, is the generation of unstable, electrically charged chemicals known as free radicals. These attack all body cells, including egg and sperm cells, to trigger a cascade of harmful, oxidation reactions. This oxidative stress is made worse by a lack of antioxidants, such as coenzyme Q10  which are needed to quench them.

All these effects build up over time and, as well as reducing fertility, are also associated with genetic abnormalities within eggs and sperm and an increased risk of developmental defects in the offspring of older men and women.

Coenzyme Q10 (CoQ10) is a vitamin-like substance that is present in almost all your cells. It’s needed to process oxygen and generate energy-rich molecules within your cells’ energy factories, the mitochondria. Coenzyme Q10 is also the most powerful, fat-soluble antioxidant in the body, helping to protect cells from the free radical reactions that damage genetic material.

Cells which work the hardest – heart, skeletal muscle, liver, egg and sperm cells – contain the most mitochondria and therefore need the most coenzyme Q10.

As well as making coenzyme Q10 within your cells, you obtain small amounts from cell-based foods such as offal, meat, fish, whole grains, nuts and green leaves such as spinach.

Average daily dietary intakes of coenzyme Q10 are estimated at up to 5mg for meat eaters and 1mg daily for people who follow a vegetarian diet.

In your mid-20s, cell levels of coenzyme Q10 start to decline as a result of lower production within the mitochondria and reduced absorption from your diet. By the age of 40, the amount of coenzyme Q10 present in your tissues, including the ovaries or testes, is up to 32% lower than when you were in your 20s. Without sufficient coenzyme Q10, cells cannot generate as much energy as in your youth, so they function at a sub-optimal level and may fail prematurely. This is one of the leading theories to account for cell ageing. 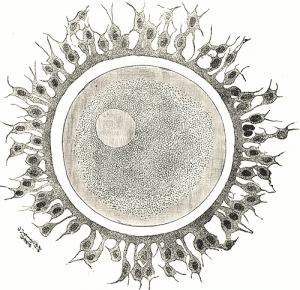 The egg is the largest cell in the human body, and has a high coenzyme Q10 requirement because it contains the most mitochondria – an average of 200,000 each, compared with 5000 mitochondria in a typical heart muscle cell, which needs a constant energy supply for heart contraction.

These egg mitochondria are vital for the rapid division and growth of the early embryo after fertilisation. Mitochondria can only supply sufficient energy if your coenzyme Q10 levels are adequate. Eggs also need coenzyme Q10 as an antioxidant, to neutralise the free radicals produced by all these energy-generating reactions, and to regenerate vitamin E so that it, too, can act as an antioxidant to protect developing eggs and embryos. So, lack of coenzyme Q10 both decreases the energy available to a developing egg cell and reduces its antioxidant protection against genetic damage.

Replenishing co-enzyme Q10 levels could mean the difference between subfertility and successful ovulation, as well as the subsequent viability of the released egg, its receptivity to sperm and its ability to continue dividing after fertilisation.

Coenzyme Q10 and the developing egg

When an egg starts to develop, it becomes raised on a little hillock of granulosa cells that nurture it by transferring the amino acids, glucose, nucleotides and cholesterol needed to feed the growing egg’s demands. Latest research shows that in older women, granulosa cells are less good at nurturing the egg as a direct result of an inability to produce sufficient coenzyme Q10, and that this age-related decline in egg quality and quantity can be reversed by adding coenzyme Q10.

Leading researchers have now suggested that older women who take a coenzyme Q10 supplements may respond with improved egg and embryo quality, a greater chance of conception and a better pregnancy outcome. Folic acid is also important as it’s needed for cell division and deficiency during the first three weeks of pregnancy – often before a new mum even knows she is pregnant – can lead to abnormal cell division and developmental abnormalities known as neural tube defects (eg spina bifida).

Coenzyme Q10 is available in two forms: ubiquinol, which is the most active, and ubiquinone which your cells must convert into ubiquinol before it can go to work. This conversion becomes increasingly less efficient with age, so I advise selecting the ubiquinol form.

Ubiquinol is available in doses of 100mg and 200mg.

I now realise that I probably have coenzyme Q10 to thank for naturally conceiving my eldest son at the age of 38, and my twins at the age of 41, after postponing a family to get my medical career on track. Supplements really can change your life!

Polycystic ovary syndrome (PCOS) is a hormone-related condition in which the ovaries become enlarged and covered in multiple, tiny cysts containing under-developed eggs. The exact cause is unknown, but it is associated with insulin resistance which can be associated with mitochondrial abnormalities. Some women with PCOS respond to treatment with a drug called clomiphene citrate, which triggers ovulation, but one in five remain resistant to its effects.

A recent study looked at the effects of coenzyme Q10 supplements on fertility in 101 women with PCOS who remained unable to conceive while taking the ovulation-stimulating drug, clomiphene citrate. Around half had coenzyme Q10 added to their treatment at a dose of 60mg, three times a day, while the others continued taking clomiphene citrate alone. The number of egg follicles that developed to greater than 14 mm or 18 mm was significantly higher in those also taking CoQ10 group, as was the thickness of the womb lining.

The researchers concluded that adding CoQ10 was an effective and safe option that could also be considered before other fertility treatments such as gonadotrophin therapy or laparoscopic ovarian drilling.

Each sperm consists of a head (containing genetic material), a mid piece packed full of mitochondria, and a tail that propels it forwards. Sperm are produced at the extraordinary rate of 1,500 per second in each male testicle, and take around 74 days to fully develop, and a further 26 days to mature; that’s a total of around 100 days to make a sperm, during which they are highly vulnerable to free radical damage.

A healthy sperm swims at a rate of around 3 mm per hour, and every 800 lashes of its tail moves it forwards by one centimetre. Although this may seem slow, sperm reach a descending egg within 30 to 60 minutes after ejaculation into the female tract, as they are helped along by eddy currents generated within the female Fallopian tubes. Sperm tail movements are vital for a sperm to approach the egg and burrow through its shell. The energy for the whip-like movements of the sperm tail is generated within its mitochondria, of which a healthy sperm has around 75.

Given that a normal sperm count is over 15 million per millilitre, and can be as high as 300 million, that represents a lot of mitochondria fighting to obtain sufficient coenzyme Q10 to function properly within any single semen sample.

In one study, 228 men, with infertility of at least 2 years duration, were divided into two equal groups who took either 200 mg ubiquinol coenzyme Q10 or inactive placebo every day for 26 weeks. In those taking coenzyme Q10, average sperm counts increased by 15% after 8 weeks, by 43% after 16 weeks and by 81% after 26 weeks. Sperm motility significantly improved by 18% at 12 weeks, 26% at 20 weeks and by 31% at 26 weeks. Sperm shape also became more normal.

After the coenzyme Q10 supplements were stopped, the men were followed for another 12 weeks, during which their sperm quality started to decline again.

Other micronutrients are also important for sperm health. In a study involving 40 infertile men, taking 30mg coenzyme Q10 (ubiquinol form) plus 440mg L-carnitine fumarate, plus 75 IU vitamin E and 12mg Vitamin C, sperm count increased by 49% after 3 months, and by 81% after 6 months treatment, with 45% successfully fathering a pregnancy.

The best dose for coenzyme Q10

Ubiquinol coenzyme Q10 is the best form to take, and is usually taken at a dose of 100mg to 200mg per day.

Ubiquinone coenzyme Q10 is usually taken in doses of 200mg to 300mg. Higher doses of 600mg per day have been used in clinical trials, but it’s best to only take these higher doses under the supervision of a medical nutritionist.

As coenzyme Q10 is fat-soluble, taking an oil-based supplement with food will improve its bioavailability and absorption.

Coenzyme Q10 appears to be a safe supplement with few side effects. Higher doses can lower blood pressure and it is often used as a complementary treatment for hypertension.

When you plan to conceive, it’s important to take a folic acid supplement, too.

Do you take a coenzyme Q10 supplement? Has it had any effect on your fertility?