Did you know that drinking cherry juice can improve exercise performance, help you sleep more deeply and wake up feeling more refreshed? If you need more beauty sleep – the amount of sleep you need to both look good and feel great – then try drinking tart cherry juice. As well as promoting a good night’s kip, cherry juice can reduce skin ageing, lower blood pressure, aid muscle recovery and improve exercise performance. These are big claims, so what is the evidence to support them?

Cherry juice is one of the richest dietary sources of melatonin – a hormone that regulates the sleep-wake cycle and helps you get off to sleep. The level of melatonin present in sour tasting cherries, such as Balaton and Montmorency strains, is at least five times greater than that found in other dietary sources such as blackberries and strawberries.

Cherries also contain tryptophan, an essential amino acid needed for the synthesis of melatonin in the brain, and for the production of neurotransmitters such as serotonin and dopamine that influence mood.

In one study, volunteers drank either tart cherry juice concentrate or placebo during two separate, 7 day periods, during which they also had their melatonin hormone levels measured. Their melatonin levels rose significantly during the period in which they drank the real cherry juice, as did their time in bed, total sleep time and sleep efficiency. No beneficial changes were seen during the week in which they drank the placebo juice, however.

The latest study, from researchers at Louisiana State University, found that in people over the age of 50 years, drinking Montmorency tart cherry juice  increased sleep duration by nearly an hour and a half per night (84 minutes) compared with placebo. The researchers concluded that tart cherry juice is effective for treating insomnia.

The dose used in this study was 240ml twice a day (once in the morning plus 1-2 hours before bedtime) for two weeks. This is an extraordinary result, and drinking cherry juice is much nicer (and safer) than taking sleeping tablets which can cause a hangover effect next morning, as well as being habit forming. 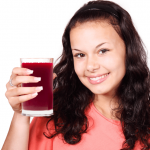 As well as improving sleep, melatonin hormone helps to protect against premature skin ageing. Skin cells exposed to ultraviolet light, for example, experience less damage and are twice as likely to survive if your skin melatonin levels are high.  As cherry juice is among the richest dietary sources of natural melatonin, this makes it the ultimate drink for sleeping beauties.

Sour cherries are also high in antioxidant polyphenols (352mg polyphenols per 100g) that have anti-ageing effects throughout the body, including the skin. In addition, sour cherries are a rich source of vitamin C which is needed for collagen production which improves hydration and reduces skin sagging.

A study that assessed the food intake of over 400 older people (age 70+) living in Greece, Australia and Sweden found that cherries were among the most protective fruits when it came to skin wrinkling. Among Australians living in Melbourne, those eating the most cherries showed 46% fewer signs of skin ageing than those eating the least. Other polyphenol rich foods such as prunes, apples and tea, were also highly protective.

As well as slowing skin ageing, drinking a glass of cherry juice every day is likely to reduce the redness and inflammation associated with acne, eczema, psoriasis and rosacea.

Cherries have an anti-inflammatory pain killing effect that mimics that of non-steroidal anti-inflammatory drugs. As a result, drinking sour cherry juice can reduce muscle and joint pain and inflammation in people with osteoarthritis, and in athletes with injuries. Cherry juice also reduces muscle damage and speed recovery after intensive strength exercise, most likely by reducing oxidative damage.

In one study, 54 runners who were preparing for a long-distance, relay race drank tart cherry juice or a placebo cherry-flavoured drink for 7 days before the event, and during the day of the race during which they ran an average of 26km.

Those drinking the true juice also reported higher satisfaction with the pain reduction and were more willing to use the drink in the future to minimize post-run muscle pain.

In another study, involving 20 marathon runners, those drinking cherry juice showed signficantly less muscle damage and muscle strength recovered faster than in the placebo group.  A further study, this time involving college students, found that after a strenuous bout of elbow flexion contractions, the degree of muscle pain and tenderness was reduced by drinking cherry juice. What’s more, the average loss of muscle strength over a four-day period was only 4% with the cherry juice versus 22% with placebo.

The antioxidants in cherry juice have protective effects on the circulation, improving arterial elasticity, reducing unwanted blood clots and promoting blood vessel dilation. Cherry antioxidants also lowers levels of a substance (monocyte chemoattractant protein-1) which is involved in furring up of the arteries (atherosclerosis). Together, these effects can improve blood pressure control.

A study published in the American Journal of Clinical Nutrition found that drinking Montmorency tart cherry juice can lower blood pressure as well as some hypertensive drugs.

In men with hypertension, drinking 60ml concentrated Montmorency cherry juice, diluted with 100ml water, lowered systolic blood pressure (the upper reading) by an average of 7mmHg more than when they drank a similar tasting, cherry-flavoured placebo. This effect occurred within one hour of drinking the cherry juice and persisted for at least 8 hours afterwards. This is a similar reduction to that seen with prescribed antihypertensive medicines, such as thiazide diuretics (water tablets) but a lot nicer to take as a daily medicine.

Scientists from the University of Michigan have even suggested that tart cherries could have positive heart benefits and decrease the risk of stroke.

To enjoy the healthy and beauty benefits of cherry juice, you don’t have to press your own. The concentrates on which much of the research was carried out are available to dilute with water, or add to other juices and smoothies, as a great way to take your beauty, sleep and performance medicine!

Capsules are also available if you prefer.

Cherries feature among my Best foods to eat to lower your blood pressure.

Click here for more tips on How to sleep better naturally.