An interesting study, dubbed the DIABEGG trial, explored whether overweight people with type 2 diabetes would benefit from eating more eggs to boost satiety and improve weight management. The only concern was – would their cholesterol levels climb through the roof?

Although an average hen’s egg contains around 200mg cholesterol, their total fat content isn’t high (5.2 g) and is predominantly in the form of monounsaturated fats (51%) or polyunsaturated fats (16%) rather than the saturated fats which are widely demonised (although steadily gaining admirers).

The DIABEGG study involved 140 Australians, with an average age of 60 and an average BMI of 34 (obese), who also had poor glucose tolerance (prediabetes) or type 2 diabetes. Half were randomly assigned to eat 12 eggs a week (two for breakfast on six days out of seven) for 3 months while the other half were asked to match the protein intake of the high egg group by eating 10g lean protein from meat, chicken, fish, legumes or reduced-fat dairy products for breakfast but to eat less than 2 eggs a week.

At the beginning of the study, there were no significant differences between the two groups in age, fasting glucose, glucose control (as measured by HbA1c), blood pressure or total body fat, although those in the high egg group weighed an average of 98kg versus 93.3kg for those in the low-egg group. Both groups were instructed to maintain their body weight which they successfully managed to do (gaining or losing less than 1kg on average).

But wait a minute …

Why Didn’t Their Lipids Change? 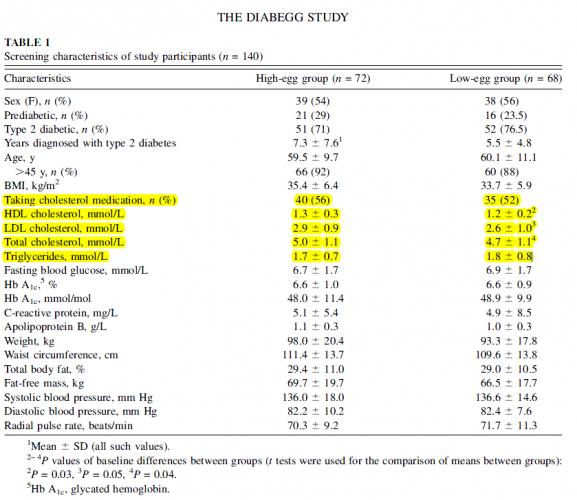 The most likely explanation is that almost half the 140 people in the DIABEGG trial happen to have inherited cholesterol-friendly genes. If you inherit ‘good’ genes, the amount of LDL-cholesterol that’s synthesised by your liver reduces as your dietary intake of cholesterol increases. If you inherit ‘bad’ genes, on the other hand, this negative feedback mechanism malfunctions, so your liver keeps continues churning out cholesterol even though you get plenty in your diet, and have plenty in your circulation.

Maybe this part of Australia is different 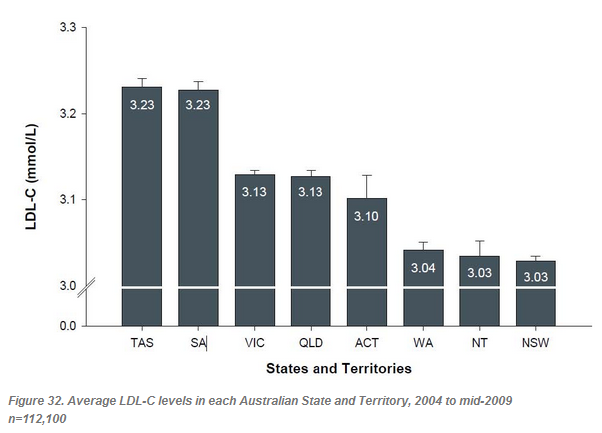 So what we are left with is a group of people who are either taking a statin, or who have naturally good cholesterol control, for whom eating 12 eggs a week does not significantly affect their blood lipids.

How many eggs per week?

Before I feel comfortable recommending that overweight or obese people with type 2 diabetes can start eating a lot more eggs (whether or not they are on a statin) this study needs to be replicated in a group of volunteers who have naturally poor cholesterol control to see what happens – although I doubt such a study would gain easy ethical approval.

The Australian National Heart Foundation currently recommends a maximum of 6 eggs per week for healthy people and those with type 2 diabetes; US guidelines recommend that people with type 2 diabetes limit their dietary cholesterol intake to 300 mg/day (one egg contains around 200 mg cholesterol) and no more than 4 eggs per week, while in the UK, there is no suggested limit on the number of eggs consumed and emphasis is placed instead on reducing dietary saturated fats.

Here is my full overview of how to follow a cholesterol-friendly diet. Has your doctor advised you to cut back on eggs? The good news is that runny eggs and toast soldiers are back on the menu, too!

2 thoughts on “Eggs And Type 2 Diabetes”