Hydrolysed collagen drinks are increasingly popular to combat the effects of ageing on skin, hair, nails and joints. They generally taste good – some are better than others –  but what is the evidence they actually work?

Lack of oestrogen slows the production of collagen and elastin fibres, and those that are present to become increasingly matted and tangled. As a result, skin loses its resilience and elasticity. Skin becomes more slack and dry, and the ill effects of long-term sun exposure catch up with us in the form of age spots and wrinkles. If you also smoke, there is a triple whammy as damage from smoking cigarettes means you are five times more likely to develop premature wrinkles than non-smokers.

You don’t need me to tell you that loss of elasticity in the skin reduces its ability to conform as closely to the contours of your face. Skin therefore appears looser and starts to sag, with lines and furrows appearing as it creases with movement. The pull of gravity then leads to sagging eyelids and bags under the eyes.

The elasticity and resilience of your skin is to a certain extent inherited. Two different types of cheek ageing are seen in middle-aged women, and the type you develop may be inherited from your mother. In Type 1, tissues of the cheek thin down, producing a gaunt, hollow look, while in Type 2, cheek structures fall forwards and downwards so that the tissues and folds between the nose and chin thicken, and a jowl starts to hang down at the jaw line. 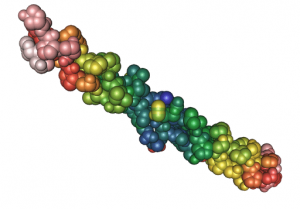 Collagen is the main structural protein that binds us together, and is found in most parts of the body including tendons, ligaments, cartilage, bones and blood vessels as well as the skin. Together with elastin (a stretchy protein) and hyaluronic acid (which attracts water) it helps skin maintain its youthful plumpness, hydration and glow.

Collagen and the more elastic elastin fibres are produced by special cells called fibroblasts. Each collagen fibre consists of bundles of smaller fibrils which, in turn, are composed of stretchy collagen molecules. These coil around each other to form triple-stranded ‘ropes’ that provide strength and flexibility.

Collagen synthesis varies at different stages of life and, as you age, the ability to replenish collagen naturally decreases by around 1.5% per year. Activation of fibroblasts can increase the production of collagen, however, and one of the factors that stimulate them is the presence of the correct amino acid building blocks to get them working.

When you eat protein-rich foods, they are digested down into their amino acid building blocks for absorption. Different proteins contain different blends of amino acids, so it makes sense to obtain the correct balance of amino acids – especially glycine, proline and hydroxyproline – that are needed to stimulate fibroblasts by consuming collagen protein itself. My granny used to suggest eating a square of jelly to strengthen nails and, apart from the sugar present, she might have been on to something!

The collagen in food is mostly pretty tough or gelatinous. It’s much nicer to obtain it in a form that’s ready broken down, or hydrolysed, by proteinase enzymes to produce small protein chains (collagen peptides) that, because of their small size, are highly digestible, easily absorbed and distributed to the skin within the circulation.

Once they reach the skin, the hydrolysed collagen peptides remain there for up to 14 days, bound to receptors on fibroblast cells to trigger four beneficial effects:

These actions occur by switching on the genes needed to make healthy collagen fibres.

Numerous laboratory studies confirmed that the presence of hydrolysed collagen peptides stimulated fibroblast cell cultures to increase their formation of collagen fibres, the next step was to test this in volunteers.

What does the research show for collagen drinks?

A double-blind, randomised, placebo-controlled trial involved 33 women, aged 40-59, with normal to dry skin and typical signs of skin ageing. They each drank a supplement providing 10g hydrolysed marine collagen, every day, for 8 weeks during winter, and dermatological assessment showed that, in those taking the active collagen drink, skin hydration increased by 28% compared with placebo.

In a similar trial, 47 women aged 35-33 took 10g of hydrolysed collagen for 84 days during winter (5g in the morning and 5g in the evening). At the beginning and end of the study, silicone skin prints were taken to analyse the depth of wrinkles. In those taking placebo, the number of deep wrinkles increased and, in those taking the active collagen supplement, the  formation of deep wrinkles was reduced by 30% compared with placebo.

Another study, using Pure Gold Collagen containing hydrolyzed collagen, hyaluronic acid, vitamins and minerals, found that drinking 50ml every day for 60 days led to a noticeable reduction in skin dryness, wrinkles and the depth of the nasolabial folds (the lines running from the side of the nose to the corners of the mouth). A significant increase in collagen density and skin firmness was observed after 12 weeks, suggesting that Pure Gold Collagen can counteract signs of natural aging.

Other studies have shown that suppleness increased by 19%, and users reported improved skin suppleness, tone and brightness, with photographs showing visible improvements in skin appearance a reduction of fine lines. Ultrasound measurements have shown improvements in skin density, with the lower layer of skin (dermis) density increasing by up to 78% in the active group compared with placebo. The addition of glucosamine, chondroitin  and vitamin C – which are also needed to make collagen – appears to provide even greater benefits in skin hydration and elasticity.

Having co-authored a review of all the evidence in The Open Neutraceuticals Journal, I’ve started taking a daily hydrolysed collagen drink myself!

What does the research show for collagen capsules?

If you prefer taking capsules, marine collagen peptides are usually combined with antioxidants such as coenzyme Q10, grape skin extracts, luteolin (a polyphenol found especially in globe artichokes) and selenium.

In one study, 41 volunteers took an oral marine collagen supplement for 2 months, during which their skin elasticity was shown to improve significantly. Digital images taken before and after showed visible improvements with a pronounced lifting effect, and reduced dryness.  Ultrasound analysis showed enhanced skin thickness (from 3884 to 4133 microns) and increased acoustic density with a homogenous distribution of collagen fibres. Almost two-thirds (61%) noticed a subjective improvement in their skin.

Two other studies compared the effects of collagen peptides against placebo. After 8 weeks, collagen density was significantly increased and fragmentation of the collagen network decreased compared with placebo, and these effects were still present after 12 weeks (ie a month after stopping the collagen supplements). The researchers concluded that collagen peptide supplements could induce the product of collagen as well as glycosaminoglycans (eg hyaluronic acid which attracts moisture into the skin) to improve signs of skin ageing.

It seems that collagen supplements do have a positive effect against skin ageing and, as a bonus, can improve joint health, too.

Watch a girl age into an old woman before your eyes through tiny changes you hardly notice. Stunning imagery.

Click here to read about the foods that can reduce skin wrinkling.

And if all else fails – smile; it’s better to cultivate laughter lines rather than frowns!

One thought on “Hydrolysed Collagen Drinks Can Reduce Skin Wrinkles”