Fish oils have beneficial effects on the brain to lift a low mood and protect against depression. Early studies showed a clear link between rates of depression in different countries and the amount of fish consumed per head of population, with those eating the least fish having the highest risk of depression. 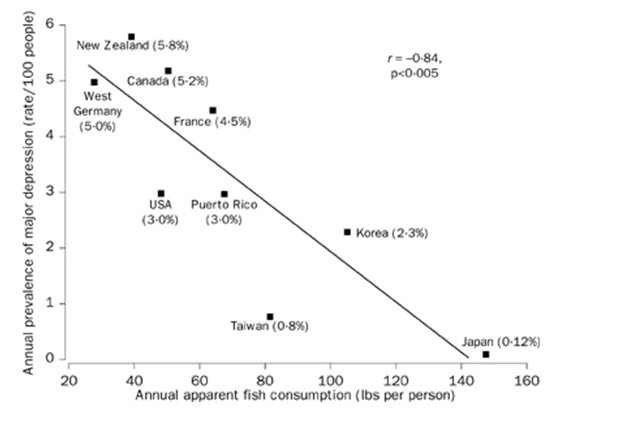 Even so, there are lots of plausible reasons to explain why fish oils may have a beneficial effect on mood.

Fish oils are a rich source of two long-chain, omega-3 fatty acids, DHA and EPA. DHA has a vital structural role in the brain, where it improves the fluidity of cell membranes so that both electrical and chemical messages pass more rapidly from one brain cell to another. EPA is involved in cell-signalling and the synthesis and activity of brain chemicals such as dopamine and serotonin which are important for regulating mood. EPA also has an anti-inflammatory action which may protect brain cells from degeneration.

The level of DHA in red blood cell membranes is a good marker for levels present in the brain, and researchers have found these are significantly depleted in people with a depressive illness compared with healthy controls. What’s more, the lowest levels are seen in those with the most severe depression.This supports the suggestion that depressive illness may be associated with low intakes of omega-3s – or abnormalities in the way they are metabolised that increases the intakes needed.

The results from 13 studies, involving 1,233 people, assessed the effect of omega-3 supplements in people with a major depressive disorder. This showed an overall beneficial effect, with omega-3 reducing depressive symptoms by 60% compared with placebo. Supplements with a higher EPA dose appeared to show better outcomes. Outcomes were also better in people taking antidepressants, suggesting that fish oils might boost the effectiveness of antidepressant medication.

A larger analysis, using data from 26 studies involving over 150,200 people, found that people who ate the most fish had a 17% lower risk of depression than those eating the least. The results were true in both men and women.

Fish, especially oily fish, are also a good source of vitamin D, which is increasingly recognised as important for brain health and mood regulation.

There is little vitamin D in omega-3 fish oil supplements, but it is present in cod liver oil along with additional vitamin A.

Is it enough to eat more fish?

The message to eat more fish for brain health is not as simple as it seems. Omega-s are mainly found in oily fish such as salmon, sardines, mackerel and herrings. Although fresh tuna contains good amounts, these are removed during processing so that tinned tuna contains even less per serving than white fish.

Aim to eat oily fish at least once a week, and ideally twice a week for its benefits on heart and blood pressure as well as its benefits on the brain and mood. Those with the highest level of benefitical omega-3s are at the top of the following table. 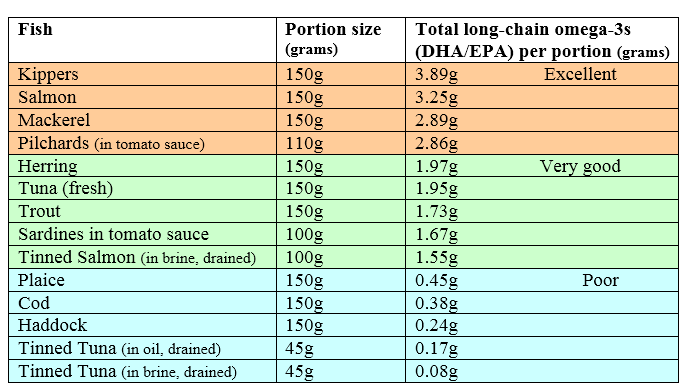 What about fish oil supplements?

Clinical trials suggest that omega-3 fish oils can improve symptoms of depression, prolong periods of remission from depressive episodes, and improve the short-term course of the illness in those affected. The threshold for a beneficial antidepressant effect appears to be 650mg total DHA and EPA per day.

A large analysis of data from 11 trials, involving people with a diagnosis of major depressive disorder, showed that omega-3 fish oil supplements provided significant clinical benefits compared with placebo, with most of the benefits coming from EPA rather than DHA. DHA, in contrast appears to be more beneficial for heart and joints.

Another analysis of 15 trials, involving 916 people with depression showed that fish oil supplements providing at least 60% EPA were effective, at doses between 200mg to around 2,200mg of EPA in excess of DHA per day.

Benefits are typically seen within three weeks. Supplement providing less than 60% EPA, however, did not appear to be effective against primary depression.

So the take home message seems to be that someone with depression will likely benefit from eating more oily fish, but that taking EPA-enriched fish oils is most beneficial.

The best dose seems to be at least 650mg total DHA and EPA per day. The best balance is one that favours EPA so you obtain between 200mg EPA to 2,200mg more EPA than DHA per day.

Fish oil helps to lower your risk of blood pressure, heart attack and stroke, too.

Do you eat fish regularly, or take fish oil supplements? Have you found them helpful for mood?

2 thoughts on “Fish Oil And Depression”