What is non-alcoholic fatty liver disease

Non-alcoholic fatty liver disease occurs when excess fats build up in liver cells. This leads to inflammation and can progress to fibrosis, cirrhosis, liver failure and even liver cancer if not recognised and treated.

The good news is that your liver is quite forgiving – even when a surgeon removes 75% of a liver lobe, it usually tries to grow back. As a result, in the early stages, NAFLD is reversible with appropriate diet and lifestyle changes. Once the liver becomes inflamed, however (a condition known as non-alcoholic steatohepatitis, or NASH), levels of liver enzymes start to soar.

Blood levels of two enzymes in particular, ALT (alanine transaminase) and AST (aspartate transaminase) are measured to assess the extent of liver damage, as they are released into the circulation when liver cells rupture. ALT and AST are good markers for the extent of liver cell damage and, once these enzymes are significantly elevated, it becomes less easy for the liver to recover.

Advanced (NASH) is notoriously difficult to treat, and is the underlying reason for between 15% and 20% of liver transplants. But exciting new research suggests that globe artichoke extracts (Cynara scolymus) can help liver cells to recover, and potentially reverse fatty liver disease. Artichoke extracts can even reduce elevated enzyme levels in people with NASH.

The liver has numerous important functions, among which are the processing of dietary fats to make cholesterol and triglycerides, and the conversion of glucose to glycogen (a starchy emergency fuel) and to more triglyceride fats for longer term energy storage.

Because a fatty liver is stuffed full of fat, it is easy to assume that NAFLD is linked to eating too much dietary fat. But, in fact, the usual cause is eating too much carbohydrate – especially excess sugar.

When liver cells are hard-pushed from processing lots of carbohydrates (or alcohol) they start to accumulate fat. The fatty changes that occur are identical to those involved in the production of pâté de fois gras when geese and ducks are force-fed carbohydrate (in the form of grain) in Perigord, France. Your liver enlarges and takes on a mottled, yellow appearance.

How do artichoke extracts help?

Globe artichoke extracts have a large volume of research to support their benefits on liver and digestive health. They are also effective at reducing cholesterol and triglyceride levels (which you can read about on my globe artichoke page). Now, researchers have found that globe artichoke extracts also have protective effects on the liver even when liver inflammation is present, and can reverse damage so that ALT and AST enzyme levels start to fall. 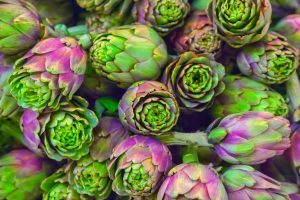 In a gold-standard, randomised, double-blind, placebo-controlled trial, researchers asked 60 people with non-alcoholic fatty liver plus inflammation (NASH) to take either globe artichoke extract (as 6 tablets per day providing 2700 mg) or placebo for two months. Both groups were also asked to exercise regularly (20 minutes walking, 5 days a week) and to lose weight.

Both groups lost a similar amount of weight during the 2 months study – an average of 4.7kg each. In those taking the globe artichoke extracts, however, levels of triglycerides and total cholesterol also reduced significantly:

In the placebo group, cholesterol and triglyceride levels hardly changed at all.

The most exciting finding, though, was that the elevated levels of liver enzymes came right down (in fact, they virtually halved) in those taking the globe artichoke extracts. In the treated group:

Given that globe artichoke is a remarkably safe herb, used for thousands of years to aid digestion and provide liver support, it’s worth considering if you are overweight, have diabetes, or regularly drink alcohol.

NB If you have diagnosed liver disease or gallstones do not take supplements except under the advice and supervision of your own doctor.

Other ways to help protect the liver from fatty changes include: