The fruit of the Baobab tree (Adansonia digitata) has been a staple food in Africa for thousands of years. The Baobab is also known as the Monkey Bread tree, Magic tree, Cream of Tartar tree and Upside-down tree. The brown Baobab fruit is similar in size and shape to an aubergine and is unique in that its pulp dries spontaneously to form a powder that crumbles easily and does not need any processing other than to separate the Baobab powder from the peel.

Baobab powder provides excellent nutrition, including energy in the form of carbohydrate and protein with very little fat. Baobab pulp provides more vitamin C than oranges, at 300mg per 100g, plus soluble and insoluble fibre, calcium, iron, magnesium, zinc, carotenoids, some B vitamins plus antioxidant bioflavonoids.

Baoba powder is filling and, as it is also nutrient dense, it is a popular supplement for weight-loss, used to make meal-replacement drinks and smoothies.

Baobab leaves, bark and seeds are also harvested for use. Fresh and dried leaves are used in cooking in the same way as spinach is used in the West, or brewed to make a medicinal tea.

The bark is used to make fibre for weaving, rope-making, or as a malaria treatment in a similar way to cinchona bark (quinine). 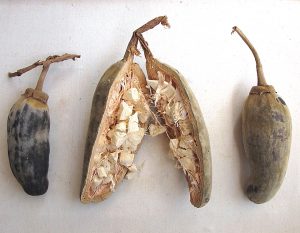 Around half the weight of Baobab fruit pulp consists of soluble and insoluble fibre. Fibre is needed for healthy bowels and digestion.

The prebiotic fibre naturally present in the Baobab fruit promotes the growth of ‘friendly’ digestive bacteria, including Lactobacilli and bifidobacteria strains.

The calcium it provides also helps the normal function of digestive enzymes.

Traditionally, Baobab fruit was used to help treat both diarrhoea and constipation.

Baobab powder is an unusually rich source of polyphenols which have a beneficial effect on glucose control. It is also an excellent source of both soluble and insoluble fibre. Together, these components help to slow the absorption of dietary sugars and starches, and slows their release into the circulation.

Researchers from Oxford Brookes University tested the effects of baobab powder baked into white bread at different doses and its effects on starch breakdown and sugar release and found that even in small doses (18.5 g) it reduced glucose response after eating.

Adding Baobab powder to a range of functional foods such as bread or drinks could help people with metabolic syndrome or type 2 diabetes improve their glucose control.

Baobab powder provides vitamin B2, vitamin B3, vitamin C plus minerals iron and magnesium which help to overcome tiredness and fatigue. Together with its readily absorbed amino acids and carbohydrate, including glucose and fructose, it provides an energy boost and is used as a pick-me-up when you’re starting to flag, and during convalescence.

Baobab provides several building blocks that are vital for the normal function of the immune system, including carotenoids (pro-vitamin A), vitamin C, vitamin B6 and iron. Traditionally it was used to support the treatment of a number of infections, as well as to reduce inflammation, pain and fever.

Baobab powder provides vitamin B1, which is needed for the normal function of the heart, vitamin C  for healthy blood vessels, vitamin B2 and vitamin B6 which are involved in the production of red blood cells plus calcium which is is needed for normal blood clotting.  One of the Baobab fruit’s major circulatory benefits, however, comes from its high potassium to sodium ratio, which helps to maintain a healthy blood pressure.

Baobab powder provides many key nutrients that are important for maintaining a normal mood, including vitamin B1, vitamin B6, vitamin C and magnesium, which makes it a great supplement during times of stress.

How to add baobab to your diet

Baobab powder is traditionally mixed with water or milk to make cool and hot drinks, sauces and as a substitute for cream of tartar in baking.

Baoba seeds can also be eaten fresh, dried or roasted and can be ground as a coffee substitute.

Baobab seeds provide a golden oil that is rich in monounsaturated fat (36%, mainly oleic acid like that found in olive oil) and polyunsaturated (31%)  fatty acids. It is used extensively for cooking, and also as a regenerating moisturiser for hair and skin.

As a prebiotic fibre, excess baobab powder can cause wind, bloating and constipation but at usual doses it is well tolerated.